In August, 2015, during a routine atlantic bottlenose dolphin photo-ID survey, Keith Rittmaster and Josh Summers of nc maritime museum / cape lookout studies encountered a dolphin intermittently rafting lazily at the surface in Back Sound. It appeared to be an unusual behavior but we could not determine a problem so we photographed the bottlenose dolphin and continued on. It was subsequently reported by boaters in the same area in August because the behavior was conspicuous.

Then in early November, 2015 we received multiple reports of a tursiops truncatus (bottlenose dolphin) “disabled”, “dying”, “with a shredded tail”, and ultimately the last report (as of this writing) on November 5th, 2015 was that it was “dead floating upright” in Beaufort Inlet. Dead dolphins don’t float upright and we found what was reported as “dead” on November 5th very much alive, and its behavior recalled our August encounter in Back Sound. But again, not being able to determine a problem, we took photographs and moved on.

Subsequent examination of photos from the 2 encounters confirmed our suspicion that the dolphin we saw Nov. 5th in Beaufort Inlet was the same individual as the one we saw in Back Sound in August. Also evident in the dolphin identification image above [or below?] is 1) it appeared skinnier in November, 2) the injury on its left side in August has healed, and 3) it had fewer Xenobalanus barnacles on its dorsal fin in November. What was reported as a “shredded tail” was actually barnacles on the trailing edge of its tail (see photo). 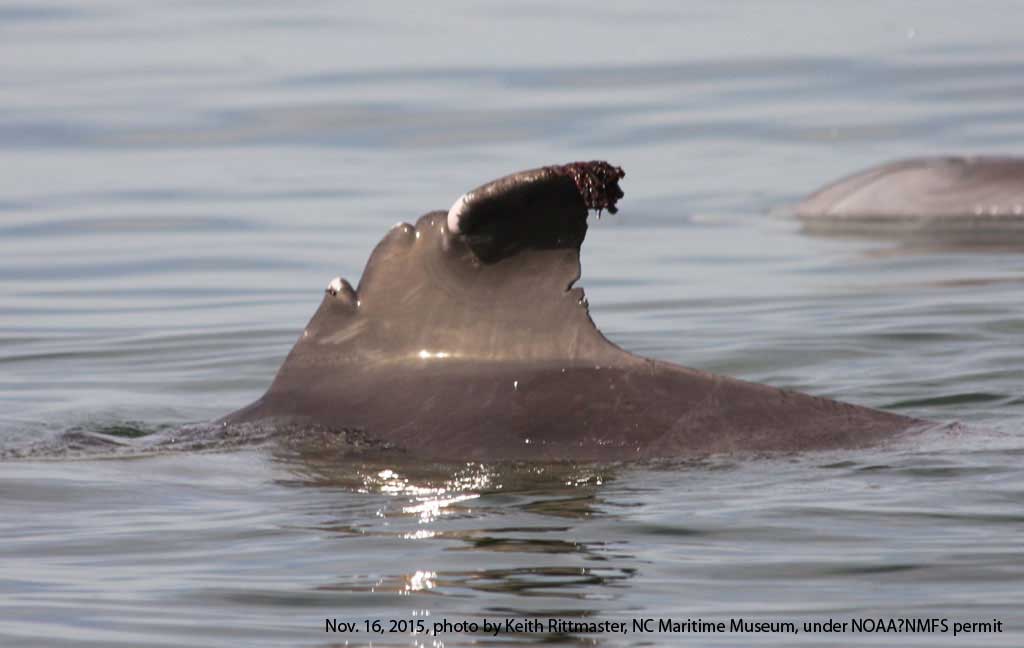 Today was an amazing day for the crew of Spyhop. The day started out with 2015’s first sighting of “Onion” here in Beaufort. While out for our regular bottlenose dolphin photo ID survey we encountered him  in the estuary near Phillips Island. He appears to be in good condition, and seems to be in the company of a new companion. 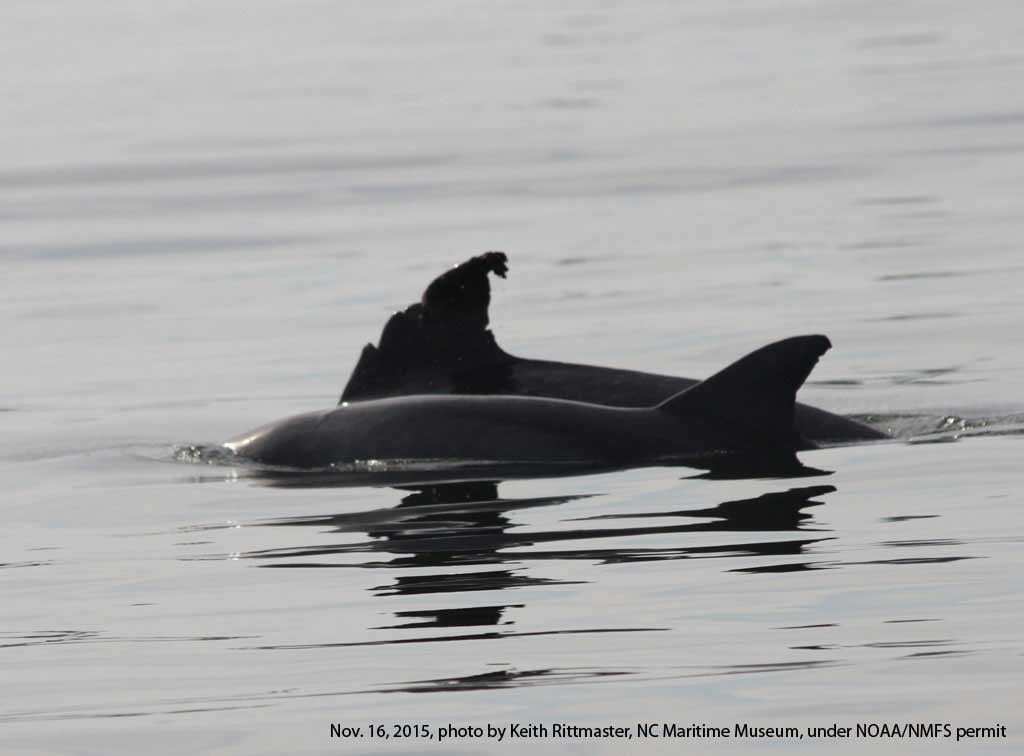 We continued out to the ocean, as weather conditions were perfect. No other groups of bottlenose dolphins were seen off Shackleford banks. However, several blows from whales were visible in the distance. Heading back into Beaufort inlet we spotted a very unusual sight…A Fin whale (Balaenoptera physalus) just off of Atlantic Beach! This encounter is highly unusual as Fin whales are rarely sighted south of Hatteras in NC or near the beach in shallow water. While photographing this animal for documentation and possible photo identification we sighted a humpback whale, also very near the beach and a short distance away near the AB circle. Unfortunately we did not have the opportunity to photograph this animal. However, on our way back to the dock we encountered yet another humpback whale only slightly farther offshore of Ft Macon! 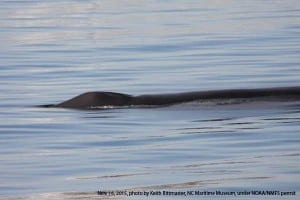 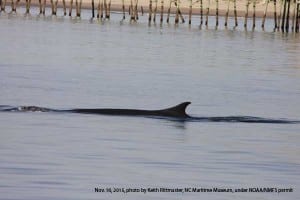 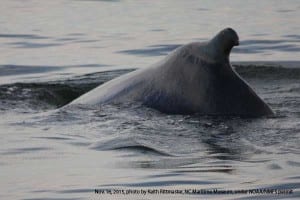 Beautiful weather allowed us to go out today on our cape lookout studies program boat “Spyhop” and do our usual bottlenose dolphin survey and photo ID.  Just a few minutes after leaving the Gallant’s channel dock we encountered our first group of approx. 15 animals in the estuary. We recognized a few of our winter “regulars”, among them at least 3-4 mother/calf pairs. The next group was spotted in the ocean off the west end of Shackleford, including freeze brand (FB) #402. Freeze brand animals have been previously captured and marked with numbers to help with dolphin research and identification. A lot can be learned from the sightings of these animals. The third group we saw was fairly large, but due to deteriorating weather conditions we decided not to attempt photos. Inside Cape Lookout Bight we saw a single bottlenose dolphin and surprisingly (for this time of year) several sea turtles, one identified as a large Loggerhead. We had hoped for another sighting of the humpback whale repeatedly seen in the area over the last few weeks, and last photographed by us on Nov. 5, 2015.