At 7:30 a.m. on October 26, 2017, a fisher reported to the NC Marine Mammal Stranding Network an entangled humpback whale around 2 miles offshore of Oceanana Fishing Pier near Beaufort Inlet. NCMM Natural Science Curator Keith Rittmaster arrived on the scene around 9:00 a.m. The whale appeared to be immature based on the size, and was lively, breathing and diving somewhat normally, but clearly encumbered by parts of a monofilament gill net that had caused some injury to the whale. While Vicky Thayer and team from the NC Division of Marine Fisheries and NCSU CMAST along with Doug Nowacek and team from Duke Marine Lab readied boats, crews, disentanglement gear and tags, Keith stayed with the entangled humpback whale and photographed the injuries and entanglement. At 10:20, after a prolonged submergence of around eight minutes, the whale resurfaced with a burst of energy and lunged speedily away – it had apparently freed itself from the entangling gear. YAY! That was one lucky humpback whale (although the whale may not agree). Keith and Doug’s teams gathered both pieces of the net for subsequent examination by NOAA Fisheries Law Enforcement. The following day Vicky with a team from CMAST and Duke examined and photographed the net after stretching it out in a parking lot, and determined that the entire net had been collected – the whale was apparently gear-free! As we report this, curators of several regional humpback whale photo-identification catalogs are searching for sighting records of the individual whale. This case highlights the critical value of collaboration. Information about the NC Marine Mammal Stranding Network and the Atlantic Large Whale Disentanglement Network can be found at http://www.marinemammalsnccnc.com/ and https://www.greateratlantic.fisheries.noaa.gov/protected/stranding/disentanglements/whale/alwdn.html. 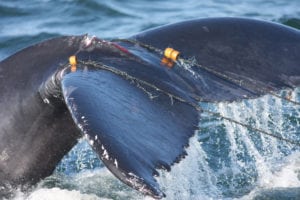 The whale’s tail (flukes) showing the entangling net and injury. 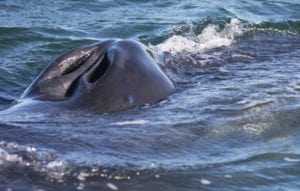 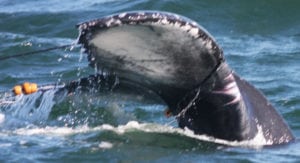 The distinctive color patterns and scars on the flukes may be helpful in identifying this individual whale. 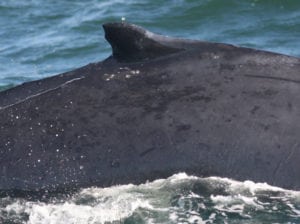 The whale’s distinctive dorsal fin may be helpful in identifying this individual whale.

Trackback from your site.

Tursiops truncatus is the scientific name for the common bottlenose dolphin. Tursiops is also the user name shared by volunteers who contribute to this blog. If you have an idea for a blog post, or think we should comment on an article you've found, click the contact button above and drop us a line!