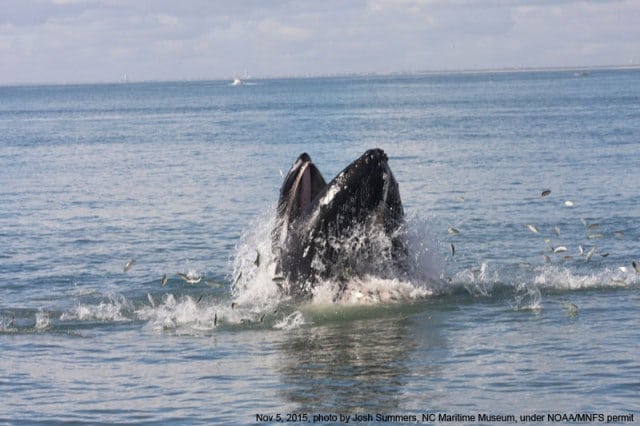 This time of year we anticipate sightings of our “winter” atlantic bottlenose dolphins arriving for their annual stay. Seldom do we encounter other species near shore, so the recent sighting of a humpback whale (Megaptera novaeangliae) was an unusual treat.

In the western North Atlantic ocean, humpback whales feed during spring, summer, and fall in a range that encompasses from western Greenland south to the mid Atlantic region of the eastern coast of the United States. Their preferred diet consists mainly of krill and small schooling fish species.

In winter, whales from the North West Atlantic migrate to subtropical/tropical waters to mate and calve. Not all whales migrate south every winter however, and significant numbers of animals are found in mid- and high-latitude regions at this time. 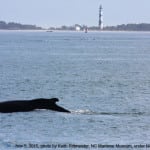 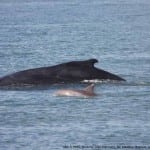 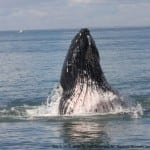 Similar to all baleen whales, adult humpback whale females are larger than adult males, reaching lengths of up to 60 feet (18 m). Their body coloration is primarily dark grey, but individuals have a variable amount of white on their pectoral fins and belly. This variation is so distinct that the pigmentation pattern on the undersides of their “flukes” is used to identify individual whales, similar to a human fingerprint. Other markings on the body and fins are useful for identification as well. One of the most distinguishing characteristics for this species is the “humped” dorsal fin for which the species is named.

Once hunted heavily to near extinction levels, populations of humpback whales are increasing and in recovery. The species is a true marine mammal conservation success story.

During our rather lengthy encounter with this animal we were fortunate to witness and record multiple events of “lunge feeding” on large schools of menhaden (another heavily exploited species that is showing signs of a population increase due to a ban on large scale targeted harvesting).

Through some of the photographs taken by the crew of “Spyhop” we have successfully matched this animal to other recent local sightings of north carolina whales, and hope to use them for further whale identification studies.

If you happen to sight a whale, please enjoy the experience in a cautious manner and at a safe distance (see NOAA guidelines). These animals are large, and though peaceful, direct encounters with boats can be dangerous for both humans and whales. 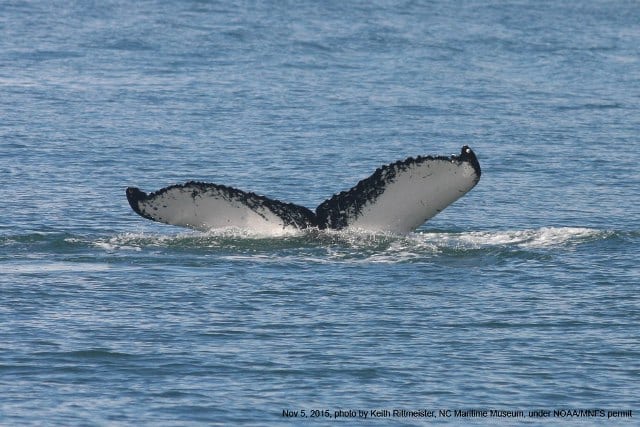 On Sunday, Nov. 1st, Katrina Smith reported a floating dead north carolina dolphin in the Newport River near the ICW at the Morehead Beaufort Yacht Club. Upon arrival, Vicky Thayer (NCDMF and NCSU CMAST) and Keith Rittmaster (NCMM) of the NC Marine Mammal Stranding Network noticed it was being supported and moved by another dolphin, a behavior termed “epimeletic”. After approximately 90 minutes of taking photos and video, and seeking help, they (with volunteer Nelson Owens) brought the dead dolphin carcass onto Lee Sykes’ TowBoat US boat near the Morehead/Beaufort high-rise bridge 5 kilometers from where it was initially sighted. After a brief examine, they put it in the CMAST freezer for future necropsy. The most interesting aspect about this case so far is that the dead dolphin, the one being supported and pushed, was a non-lactating adult female. This is unusual because such epimeletic behavior has often been directed towards dead calves, but not towards an adult dolphin as far as we know.

Both bottlenose dolphins are in the nc maritime museum dorsal fin photo-ID catalog, although neither has been seen often. An upcoming necropsy as part of our ongoing dolphin research will yield more information about the dead dolphin, and hopefully future sightings of the “pusher” will teach us more about that dolphin as well. 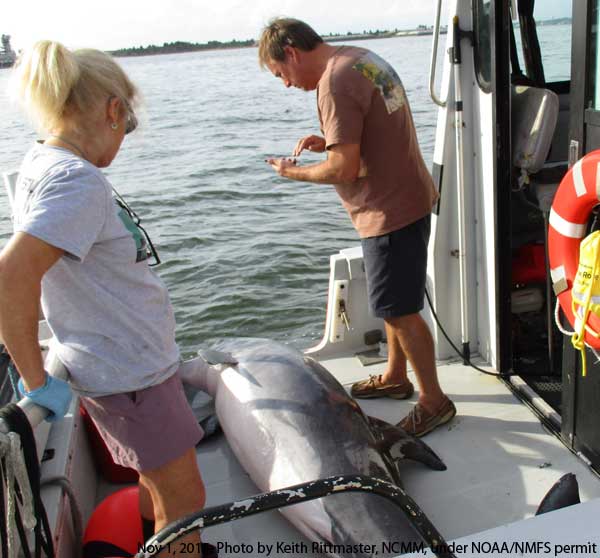 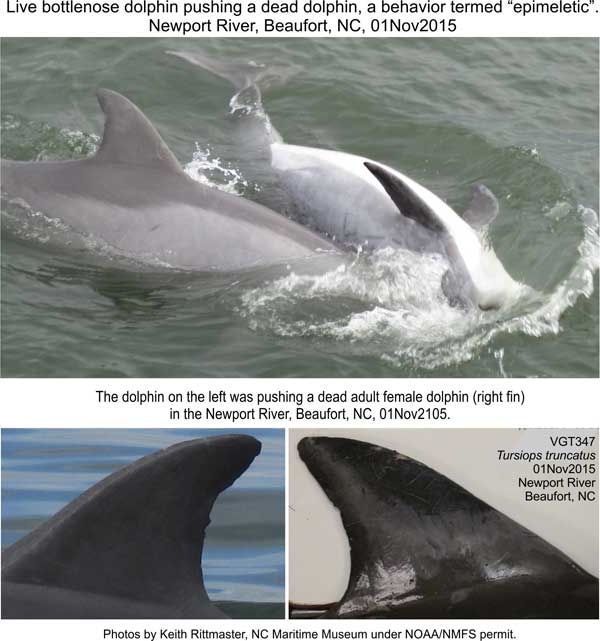 “It is hard to say what will become of the NC Central Coast Marine Mammal Stranding Network and others like it. Without renewed funding in the 2014 year, Vicky will be unable to continue the network and stranding response will stop in this area.”

This is a critical time for dolphins in the Atlantic. Every piece of information we can gather about increase in the mortality rate due to the morbillivirus is vital. Worried about the overall ecosystem? Worried about how it will influence fishing in the area? Just love dolphins and recognize that they are an integral part of what we all love about the North Carolina coast? You should her story here.

Do you still sell tshirts?